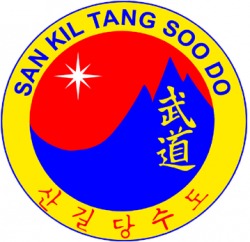 San Kil Tang Soo Do was founded on May 30, 1996 by Kwan Jang Nim David Sgro. The style of San Kil (Mountain Path) is based on the classical marital art Tang Soo Do (China Hand Way). The mountain path represents challenges that we all face in life and must persevere to overcome. The term "San Kil” is an old Korean cliché that means “when there is a mountain in front of you, find the path and overcome it.”  This philosophy is represented in the style's logo or "Kwan Gi" (shown to the right).

Tang Soo Do (Hangul: 당수도) is the Korean pronunciation of the Chinese characters 唐手道.  Tang Soo Do literally means "The Way of The Chinese Hand" and has roots in various styles of martial arts including those found in Korea, China, and Okinawa. These roots started in Korean Soo Bahk, Chinese Shaolin and Japanese Shotokan.  The first word "Tang" represents the Chinese Tang Dynasty (617-907 AD).  Tang Soo Do is shaped by 60% Soo Bahk Do, 30% northern Chinese and 10% southern Chinese. Kicking techniques, for which Tang Soo Do is unsurpassed, are based on Soo Bahk.

According to the history of the Moo Duk Kwan (from which the majority of all modern Tang Soo Do stylists trace their lineage) can be traced to a single founder: the late Grandmaster Hwang Kee.  Kwan Jang Nim Hwang Kee learned Chinese martial arts while in Manchuria.  He also was influenced by the indigenous Korean arts of Taekkyon (택견) and Subak (수박 or 手搏).  He has also written that he learned the philosophy of Okinawan Karate from Gichin Funakoshi's books.  Kwan Jang Nim Hwang Kee also was highly influenced by a 1790 Korean book about martial arts called the Muye Dobo Tongji (武藝圖譜通志 / 무예도보통지).

Tang Soo Do integrates the graceful movements of Northern Chinese martial arts with the sharper techniques of centuries-old Korean martial arts. It is admired and respected throughout the Martial Arts world for its beauty and effectiveness. Tang Soo Do is known for having one of the most effective training methods for developing discipline, focus, confidence and physical fitness.

“The sole purpose for the study of San Kil Tang Soo Do is to develop students’ self-esteem so that they, when faced with physical, mental and spiritual challenges in life, will have the confidence to confront the challenge, and succeed.”

More on "Tang Soo Do" aka Korean "Karate"

Tang Soo Do is relatively modern: however, its basis, the Korean disciplines of Soo Bahk and Tae Kyun, date back many centuries. Tang Soo Do is a composite style influenced by the Northern Chinese arts, the Southern Chinese arts, and the Okinawan discipline of Karate. The Chinese influences are as follows: basic training (Seh Bop - method of postures, Bo Bop - method of steps, Ryun Bop - method of conditioning), and form and combat applications (Dham Toi Sip E Ro, and "Tae Kuk Kwon"). The Okinawan influences were primarily a result of the Japanese occupation of Korea from 1910-1945. The term "Tang Soo Do" was the name Grandmaster Won Kuk Lee, founder of Chung Do Kwan, originally applied to his art. After a meeting with Mr. Lee in 1947, Kwan Jhang Nim Hwang Kee decided to integrate the art of this "Tang Soo Do" (Okinawan discipline of Karate) into his Hwa Soo Do discipline. Tang Soo Do kicking techniques are based on the ancient Korean kicking style of Tae Kyun. Tang Soo Do can be though of as both a hard and soft style, deriving its hardness in part from Soo Bahk and its soft flowing movements from the Northern and Southern Chinese systems.

The terms Tang Soo Do and Kara-te Do are related. During an era of escalating Japanese militarism that started in the late 19th Century, the name was changed from 唐手 ("Chinese hand" or "Tang hand" verbatim, as the name of the Tang dynasty was a synonym to China in Okinawa) to 空手 ("empty hand") – both of which are pronounced "karate" – to indicate that the Japanese wished to develop the combat form in Japanese style. The pronunciation "tō" and "kara" for the radical 唐 can be used interchangeably. The second being an elegant older term for China.
Note that the Chinese didn't refer to their martial art as 唐手道. One of the terms used to describe their arts was 拳法 (Quan fa) which means "fist principles" or "the law of the fist" (Quan means "fist" and fa means "law", "way" or "method"). It is the origin of the Japanese term Kenpo or Kempo. Chinese martial arts are also most commonly referred to by the Mandarin Chinese term wushu (武術; pinyin: wǔshù) and popularly as kung fu or gung fu (Chinese: 功夫; pinyin: gōngfu), are a number of fighting styles that have developed over the centuries in China.