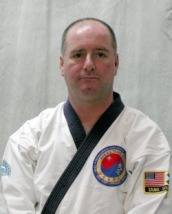 Kwan Jang Nim, which means School Founder or Grandmaster, is a 7th Degree Black Belt in Tang Soo Do (Dan #22923); a 5th Degree Black Belt in Japanese Ju-Jitsu; a Certified Arnis/ Kali/Escrima Instructor; a 2 Stripe Blue Belt from Royce Gracie in Brazilian Jiu-Jitsu; and the Creator of FIGHT CUT (Fully Integrated Grappling & Hitting Techniques, Close Up Techniques) which is a Military Combatives System taught to thousands of soldiers including the US Special Forces (Green Berets) and the 82nd Airborne (Ft Bragg, NC).  KJN Sgro was a long time student of KJN Charles Ferraro (Kwan Jang Nim and Founder of Tang Soo Do Mi Guk Kwan), who was a great influence and life mentor.  KJN Sgro was also highly influenced on a technical level by KJN HC Hwang (Grandmaster of Soo Bahk Do Moo Duk Kwan; Dan #509).  KJN Sgro has had many wins at National & International competitions and was Coach for Team USA (1999 London, 2001 Athens, 2002 Holland, 2003 London, 2006 Athens, 2007 USA).

KJN Sgro is currently a student of KJN Song Ki Kim, Founder of the World Dang Soo Do Union (Dan #312). "Grandmaster Kim is very humble and an accomplished teacher who is relatively unknown here in the US," says Sgro, "but as it has been said that you know a tree by its fruits."  Grandmaster Kim has produced many well known amazing martial artists.  His students include a long list of Who's Who in Tang Soo Do not the least of which is Chuck Norris (Dan #2819).  KJN Sgro currently is a Christian Missionary serving and living with his family in Guatemala.