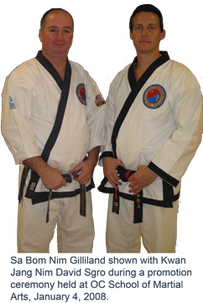 Owner and Master Instructor.  Mr. Gilliland enrolled in martial arts at the age of 17 while a student at the University of Connecticut.  He achieved black belt in 1991 (Moo Duk Kwan Dan #30776) concurrently graduating with a mechanical  engineering degree.  Since then he has progressed in his life and career achieving his Instructor Certification in 1993, professional engineering licence in 2000 and Sa Dan (fourth degree black belt) and Sa Bom (사범, Master Certification) in 2007.  He is a certified Master Instructor of Tang Soo Do and also a first-degree black belt in Shiho Karano Ju-jitsu. Mr. Gilliland has placed in numerous competitions on local, state, national and international levels.  He is a Connecticut State Champion, US National Champion and International Champion, winning events in 1990, 1991, 1992, 1994, 1999, 2006 and 2007.

In October 1997, Mr. Gilliland moved to Orange County (CA) from the east coast to further his engineering career.  He became partner of a specialty construction firm in 2000 that was named to the 2003 Inc. 500 fastest growing companies.  He combines his technical background with application of martial arts technique in his teaching.  His pursuit of martial arts and personal excellence continues with his dedication to passing on the valuable experience of Tang Soo Do.